The study of glaciers and ice sheets has traditionally been split into three communities: those conducting observational research of the present day cryosphere; those developing theory and models to simulate cryospheric processes; and those who use the palaeo record to interpret glaciations of the past. Isolation of these three branches of glaciology can hinder both improved understanding of physical glacial processes and improved interpretations of the palaeo record. In a recently published paper (Greenwood et al., in press) my colleagues and I reviewed the current state of knowledge of one aspect of glaciology (ice sheet hydrology) from the perspectives of these three research communities. The paper further discussed key questions and uncertainties in understanding of the glacial hydrological system, leading to conclusions including: that the traditional bi-modal view of subglacial hydrology is challenged by both modern observations and palaeo interpretations; that we do not fully understand the extent to which different landforms represent different drainage modes or are different expressions of one drainage mode; and that the geomorphic imprint of the multitude of frequencies and magnitudes (figure 1) of drainage events remains poorly understood. These conclusions highlight only some of the many research challenges for the glaciological community which cross-disciplinary cooperation could help to tackle. 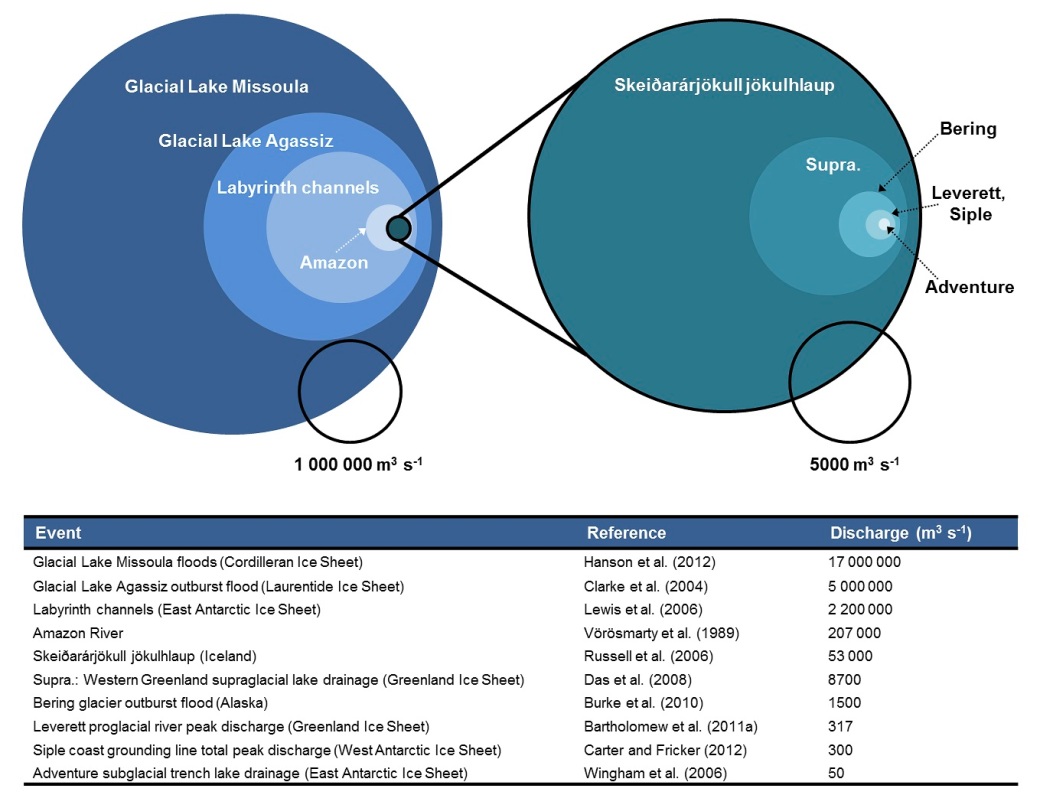 Figure 1. Peak discharge circles, scaled by area. The peak discharge of the Glacial Lake Missoula floods is 340000 times greater than the Adventure Trench drainage; like comparing the Amazon River with a small brook. From Greenwood et al. (in press). 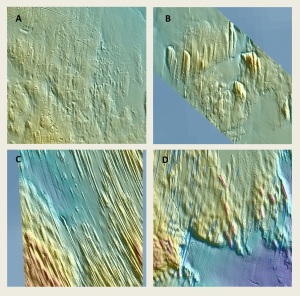 Our understanding of physical glaciological processes, and controls on the stability, dynamics and retreat of ice sheets must continue to improved if we are to better predict ice sheet sea level contribution in response to future climatic change. Accessing the proglacial and subglacial environments of ice sheets to observe processes first-hand is, however, very much restricted due to both logistical and safety constraints. Furthermore, despite the advent of remote sensing, observational records from present-day ice sheets are short (up to tens of years) in comparison to glacial cycles (thousands of years). The glacial landform record, a footprint of previous glaciations left behind on both present day land and the sea floor, provides a window into these environments, and a great deal of insight into the processes operating beneath past ice sheets. Mapping and analysis of glacial landforms can reveal a significant amount of information, including the direction and speed of ice flow, the topology of the subglacial hydrological system, the retreat pattern of the ice sheet margin, and the extent of iceberg calving activity. As an example figure 2 illustrates some of the multitude of forms of glacial lineations, from which both direction and relative speed of ice flow can be interpreted. 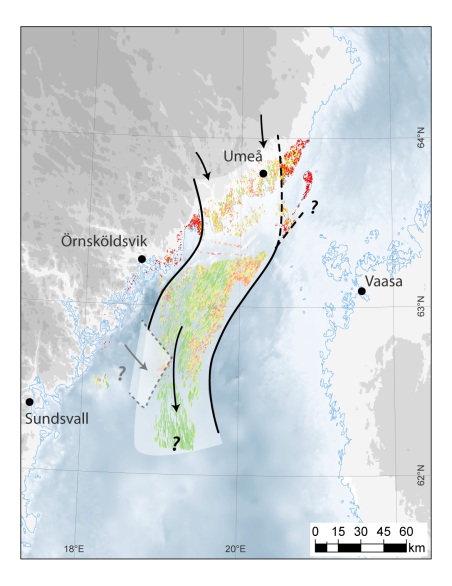 Marine-terminating catchments are the source of much of the mass loss from the Greenland and Antarctic ice sheets, sensitive to changes in both climate and in the ocean. It is thus particularly important to better understand controls on marine ice sheet instability if we are to predict the effect of future atmospheric and environmental change. Recent work in the Gulf of Bothnia region of the past Fennoscandian Ice Sheet gives a unique insight to the dynamics, retreat pattern, and processes operating under a marine-terminating ice stream during the last deglaciation. In addition to ongoing modelling work and data analyses, mapping of glacial lineations allowed us to identify the onset of fast ice flow from the north-east Swedish coast (Greenwood et al., 2015; figure 3). Relating bedform length to relative ice flow speed (Stokes & Clark, 2002), the ice stream width was constrained by a sharp transition between relatively short and relatively long lineations visible on both present day land and the sea floor. Aside from an improved understanding of ice dynamics and retreat in this region of the Fennoscandian Ice Sheet, this research offers a unique perspective on marine-terminating ice stream catchments. The broad, shallow, low salinity setting of the Gulf of Bothnia contrasts with the topographically-constrained continental shelf settings typical of studies of present-day marine outlet glaciers. Palaeoglaciological study can thus improve our understanding of the multitude of responses exhibited by ice sheets, in a range of geographical settings, to external forcings.

In concert with palaeo proxies for reconstructing past climates and environments, glacial landforms can provide a record of long-term response to changing conditions. The study of ice sheets of the past can thus offer important insights to ice sheet response in the future. There is a real danger of isolation between glaciological research groupings, leading to disconnects in understanding of processes important for predicting the future response of present day ice sheets to a warming climate. Fostering cross-disciplinary research is imperative if the true diversity of processes and controls exhibited by contemporary ice sheets are to be understood; using the past to inform the present, and vice versa. 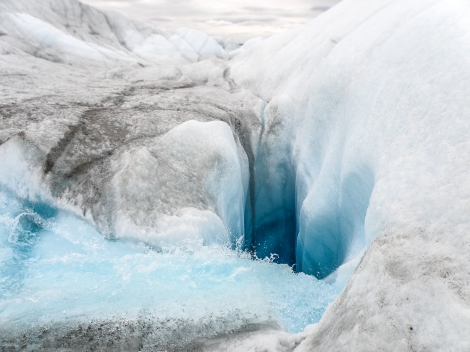 The delivery of surface-generated meltwater to the subglacial (basal) environment beneath glaciers and ice sheets is a driver of increased ice flow through raising water pressure in subglacial hydrological systems and lubricating the interface between the base of the ice and the rock or sediment beneath. The extent to which this surface-to-bed meltwater transfer influences the average annual ice velocities of outlet glaciers on the Greenland ice sheet is debated, but we know that at least in the short term, the delivery of meltwater into the subglacial system promotes localised acceleration of ice flow (e.g. Bartholomew et al., 2011a: Hoffman et al., 2011). Our new paper in The Cryosphere describes the application of a model for predicting the formation of moulins (figure 1) and the drainage of supraglacial lakes (surface meltwater ponds) to the bed of the Leverett Glacier catchment in southwest Greenland. 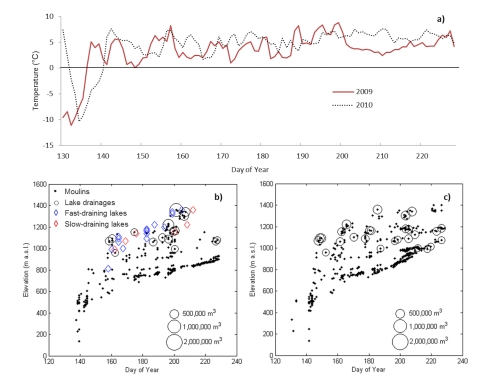 Figure 2. a) Daily average air temperatures at 457 m a.s.l. for 2009 and 2010, and moulin formation and lake drainage through the b) 2009 and c) 2010 melt seasons with elevation. Blue diamonds in panel b) represent observed drainage of lakes in events between two MODIS images, and red diamonds represent lakes which drained over a period of several MODIS images; after figure 2a of Bartholomew et al. (2011a).

The model can be split into three main components: the generation of meltwater at the surface through melting of snow and ice; the routing of meltwater across the ice surface and storage in supraglacial lakes; and the propagation of fractures through the ice driven by water pressure from meltwater inflow. The outputs of modelling provide information on the timing and location of moulins penetrating from the surface to the bed of the ice, the timing and location of the drainage of lakes through hydrofracture, the storage of meltwater in the supraglacial and englacial (internal) hydrological systems, and the quantity of meltwater reaching the glacier bed.

The results of our modelling were compared with ice surface velocities measured with a series of 6 GPS stations (Bartholomew et al., 2011a) and observations of supraglacial lake drainage events (Bartholomew et al., 2011b) in the Leverett glacier catchment. The pattern of modelled lake drainages compared favourably with that observed from satellite imagery during 2009 (figure 2) . Modelling for the 2010 melt season produced a 44% increase in the number of lakes which drained, with lake drainages starting earlier in the season and occurring more frequently at higher elevations in comparison to the cooler 2009 melt season. Formation of moulins in both years occurred at increasing elevation with time into the melt season, reflecting retreat of the snowline and water availability for driving fractures through thicker ice inland of the margin. 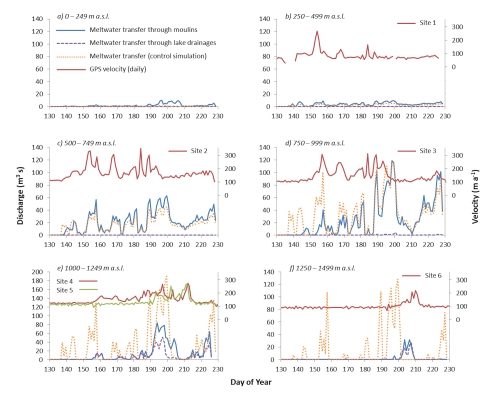 Figure 3. Supraglacial meltwater delivered to the bed each day through modelled lake drainages, moulins, and for the control simulation within ice surface elevation bands of 250 m during 2009. Ice surface velocities from GPS sites 1 – 6 are plotted within their respective elevation bands (after Bartholomew et al., 2011b).

To demonstrate the need to account for supraglacial storage and routing of meltwater, and the ability of that water to reach the ice sheet bed through hydrofracture, we conducted a control simulation where all surface-generated meltwater was transferred locally and instantaneously to the bed. The importance of accounting for this was particularly apparent above 750 m a.s.l. (figure 3), where discharge modelled including supraglacial storage, routing and hydrofracture greatly outperformed the control simulation when compared against measured ice surface velocities. Modelled surface-to-bed meltwater transfer characterises well the up-glacier progression of increased ice surface velocities, with the relative contribution of meltwater drained through lakes increasing with elevation.

With meltwater production rates responding to increases in air temperature, we tested our model with a future climate scenario (IPCC 2007, A1B June, July, August Arctic scenario) to investigate possible future changes in the occurrence of ice surface-to-bed meltwater transfer. The density of moulins and drained lakes at higher elevation in the Leverett catchment increased in response to this temperature forcing (figure 4), giving a 68 % increase in moulin numbers, 182 % increase in the drainage of supraglacial lakes, and, most importantly, a 14 % increase in the proportion of surface-generated meltwater reaching the glacier bed. At elevations above 750 m a.s.l. these increases result in more widespread delivery of meltwater to the bed through ice of large thickness, beginning earlier in the melt season.

While below the ELA (equilibrium line altitude – the average elevation on a glacier where snow accumulation equals ice melt) ice dynamic response to meltwater inputs may be negligible over annual time scales (e.g. Sole et al., 2013), above the ELA we may expect a positive relationship between summer temperatures (and melt rates) and ice surface velocities where efficient subglacial drainage of meltwater is hindered by large ice thicknesses and shallow ic surface slopes (e.g. Meierbachtol et al., 2013). Crucially, the implications of a warming climate and increased ice surface melt for subglacial drainage configuration and ice dynamics are difficult to assess fully without incorporating a model such as this into models of subglacial drainage and ice flow. This work thus contributes to efforts to couple physically based models of surface meltwater generation, subglacial hydrology and ice sheet dynamics, as are required to better understand past, current and future sensitivity of ice sheet mass balance and dynamics to climate change.

The full paper is available to read here.

Thoughts on Science and Nature

Taking breast cancer by the balls, beating it to a pulp and leaving it cowering in the corner

Discovering the world in 4 dimensions

Deciphering Past Climate at the Ice-Ocean Boundary

The latest news on WordPress.com and the WordPress community.

From a Glaciers Perspective

Glacier Change in a world of Climate Change

To The Poles
Aber Cryoconite